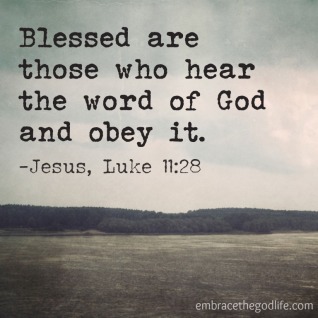 My kids can tell you that I often use the phrase, “delayed obedience is disobedience.” It’s a great reminder for all the times I ask them to do something, and they don’t immediately obey. Maybe it’s a show they’re watching or a toy they’re playing with it, regardless of the perceived reason, they are still NOT doing what I asked them to do. As a parent, I expect my children to obey. I prefer when they to do so with a good attitude, but I realize at 4 and almost 9, that might be pushing my luck some days.

Ironically, it’s this same lesson God used to remind me of my disobedience to Him today. He had been working on my heart about an area I needed to address (a topic for another day) and yesterday, I felt compelled to act on it. I delayed and reasoned that if it was STILL on my heart today, I’d do it. Ironically even after I landed on this idea of delayed disobedience, I STILL felt strongly that I shouldn’t wait but act now.  I continued to reason with myself that it was really a small thing and no one else even knew about it so what would it matter if I waited just one day? I convinced myself that because it wouldn’t make a difference to anyone TODAY, but could potentially put me in an awkward spot, I should sleep on it just to make SURE God REALLY meant for me to do this.  So, I disobeyed and delayed until the next day to gauge the level of importance then. To be completely transparent, even when I remembered this morning, I STILL didn’t respond then because it wasn’t ‘as strong’ of an urge-ridiculous I know. I continued to rationalize that maybe after little longer delay it would just go away completely. (I’ve told you before to use my life as your example of what NOT to do. You’re welcome.)

It took awhile and a few reminders on God’s part before I finally gave in. But IN His gentle reminders, I realized that my delayed obedience WAS disobedience and that because I disobeyed there would be a cost-one, I might never fully realize. Had I acted yesterday when I felt strongly about it, who knows what God was prepared to do? Had I acted yesterday, maybe the timing would’ve been ideal, but in my disobedience maybe it cost God being able to use or bless my act the way He had planned. Ultimately, I’ll never know. But, what I do know is that even though I obeyed God today, it doesn’t change the fact I disobeyed Him yesterday.  It also doesn’t change what it reveals about my heart and my attitude towards God.

My disobedience shows that I care more about what I THINK someone MIGHT think about me MORE than what God thinks.  It reveals that while He’s important, He’s not MORE important than myself. It reveals that while I seek God’s will and direction, I’m hesitant to obey Him if I don’t agree or understand WHY I need to. My delay shows that I still have much work to do in submitting myself to God and being willing to be humble before Him and others.

I wonder in this season of your life if there’s something God’s been asking you to do, and you keep delaying. Is there something that due to your perception of what others may think you haven’t obeyed Him fully? Is there something that might seem small to you, and maybe you’ve decided to obey-eventually-but haven’t yet? Whatever reasoning you’re using to not obey God immediately, I mean RIGHT NOW, can I encourage you to check the source of that ‘reasoning’? Could it be your delayed obedience is costing you countless blessings; maybe even the very ones you’ve been praying for? If there is something, please learn from me, and don’t delay-just obey.

Founded in 2017, Rooted Leaders is equipping EVERY woman to reach her full potential by discovering the calling God has on her life through the utilization of proven leadership & biblical principles. Every program is focused on developing her ‘roots’ so that she can lead an impactful and purpose-filled life inspiring others and producing ‘good fruit’ as she grows. View all posts by Rooted Leaders

Psalm 1:3 “That person is like a tree planted by streams of water, which yields its fruit in season and whose leaf does not wither-whatever they do prospers.”

Colossians 2:7 “Let your roots grow down into him, and let your lives be built on him. Then your faith will grow strong in the truth you were taught, and you will overflow with thankfulness.”

Jeremiah 29:11 “For I know the plans I have for you,” declares the Lord, “plans to prosper you and not to harm you, plans to give you hope and a future.”

Isaiah 43:19 “For I am about to do something new. See, I have already begun! Do you not see it? I will make a pathway through the wilderness. I will create rivers in the dry wasteland.”